Home of the Greenwave 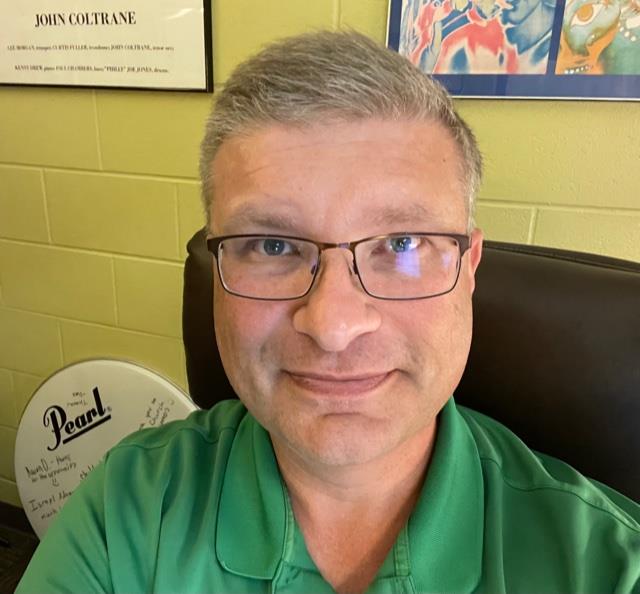 Mr. Wise has over 30 years of teaching experience in school, church and community settings. He has been a performing member and often soloist with the Sprayberry High School bands, the Samford University Bands, the Samford University Choirs including the A Capella Choir, The Alabama Symphony Chorus, The Spirit of Atlanta Drum and Bugle Corps, and the Samford A Capella Alumni Choir.  He is the founding member of the Sprayberry Orchestral Winds. He was first chair trumpet Georgia All-State Orchestra and received the Outstanding  Soloist Award from the National Association of Jazz Educators.
Mr. Wise has studied trumpet with Larry Black from the Atlanta Symphony, Johnny Jacobs, Dan Martin, Freddie Martin and John Gage. He has studied voice with Dr. William Bugg and Dr. Clint Nichols. His conducting teachers include Dr. L. Gene Black, Dr. Timothy Banks, Dr. Leroy Yarbrough and Dr. Ken Gabriels. Mr. Wise has also performed as a freelance musician on trumpet, baritone/trombone, bass, percussion, voice, piano and guitar. Mr. Wise’s arrangement of “Amazing Grace” was featured at the Olympic Village during the 1996 Olympic Games in Atlanta, Georgia.

Mr. Wise has been at Leeds High School, Leeds, Alabama since 2008. The band and choir programs have grown over 300%. The Music and Movement Program at Leeds boasts 14 ensembles not including chamber instrumental groups. All but 3 of those groups are competitive. His instrumental, vocal, and visual ensembles consistently receive Superior ratings, Best in Class, and Sweepstakes Awards. His bands and choirs are active in Bands of America, USBands, Festival Disney, Festival of Champions, Alabama Music Educators Association, Southeastern Color Guard Circuit, and The Alabama Vocal Association. The Symphonic band and Emerald Voices have been invited as a featured ensemble, to the Choirs of America Festival at Carnegie Hall where they will premier his commissioned composition "City of Valor" in honor of the City of Leeds.

He is a member of Phi Mu Alpha SINFONIA, Alabama Bandmaster's Association, the Alabama Vocal Association, and the National Association for Music Education. He is also a Licensed, Ordained Minister. He earned his Bachelor of Music with concentration in Instrumental Music and Education from Samford University and his Master of Music with concentration in Voice and Church Music from New Orleans Baptist Seminary. Mr. Wise is also director of the Leeds Community Chorus and Minister of Music and Worship at Eastside Baptist Church in Birmingham. He is also a member of the I-65 Project in association with Music For All which seeks to enhance band and choir programs in underserved urban and rural communities.
He and his wife Melanie, also a teacher, have a son, Daniel. He enjoys time with his family, hunting, fishing, boating, and hot rods.

Leeds City Schools Non-Discrimination Statement The Leeds City School System does not discriminate on the basis of sex, race, national origin, creed, age, marital status, disability, or any other reason prohibited by state or federal law in its educational programs, activities, or employment policies and provides equal access to the Boy Scouts and other designated youth groups as required by Title VI and Title VII of the 1964 Civil Rights Act, Title IX of the 1972 Educational Amendments, Section 504 of the Federal Rehabilitation Act of 1973, and the American with Disabilities Act (ADA). Leeds City Schools utilize curriculum materials that reflect the cultural and racial diversity present in the United States and the variety of careers and roles open to women as well as men in our society. An objective of the total curriculum and teaching strategies is to reduce stereotyping and to eliminate bias on the issue of sex, race, religion, and disability, to include Boy Scouts and other designated youth groups. The Curriculum should foster respect and appreciation for the cultural diversity found in our country and an awareness of rights, duties, and responsibilities of each individual as a member of pluralistic society. Inquiries regarding compliance with Title VI, Title IX, and Section 504 and ADA may be directed to the Superintendent of Education or designee, Leeds City Schools, 1517 Hurst Ave, Leeds, AL 35094. Accessibility Notice: Leeds City Schools is committed to providing a website that is accessible to the widest possible audience, regardless of technology or ability. This website endeavors to comply with best practices and standards defined by Section 508 of the U. S. Rehabilitation Act. If you would like additional assistance or have accessibility concerns, please contact our Technology Office at (205) 699-4505 ex 4014 or by emailing ajackson@leedsk12.org. We are continually striving to improve the accessibility standards of our website.
Copyright © 2002-2023 Blackboard, Inc. All rights reserved.